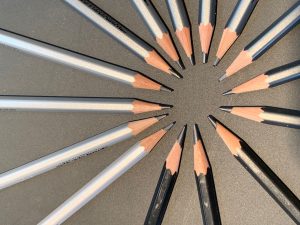 There’s one classic interview question that I’ve posed to many a marketing job candidate during my 30-year career in software.  The request is straightforward, albeit mercantile: “Sell me a pencil.” It’s  reminiscent of the line, “Sell me this pen,” which was posed in a sales training course with mixed results by Leonardo DiCaprio in the 2013 movie, The Wolf of Wall Street.

The apparent simplicity of a pencil is a great way to gauge judgement, pragmatism, empathy, and creativity in a marketing or sales position.  The request has proven to be both a comfort and stress to  candidates. I’ve always been encouraging, if not leading. The open-ended question fosters conversation, shared values, and collaboration; essential ingredients for a positive working relationship.

A finely worn path is to first determine if there’s even a need, want, or desire for a pencil. About half the job candidates usually ask for some boundaries to understand the prospective customer’s industry, role, problems, and applications, such as art, design, music, writing, construction, etcetera.

More often, in part because it’s an interview (the heart beats nervously), the flood of answers quickly leap past needs to prematurely devolve into bandied features and benefits, brand personality, and stretches for the stars from mission to vision. Over the years I’ve found there’s often a groundswell of creativity after limbering up with rote observation, some of which is reflected below.

I like the question because so little thought has typically gone into this foundationally basic and lowly wooden accomplice that we have routinely taken for granted and yet extensively employ. 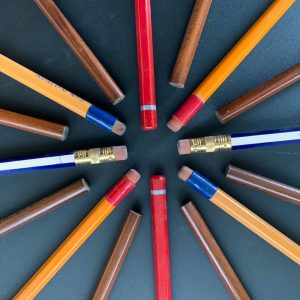 These three qualifying questions are fundamental. “Are you in the market for a pencil?” “How long have you been looking?” “How can a pencil help you?”

What follows qualification is a smattering of riffs, features, and benefits that I’ve heard.

There are many times you want a pencil, and then there are those occasions where you need a pencil.

A pencil is a highly capable instrument that derives its power from its sheer simplicity and potential for brilliance. Like voice, it’s often casually used, modulated with little attention given to the expansive range of its capabilities.

A pencil delivers a light to dark bounty of graphite, with a line that can walk from thick to thin, from a ghostly hard 9H to a very soft, velvety black 9B.

A rich deposit of pure graphite was discovered in Borrowdale, England in 1564, giving rise to the pencil industry. The word, graphite is etymologically derived from the Greek word, “graphein,” which means “to write.” Pencils play with brightness and character through faint to dense crosshatch. When obliquely held the device pours shading and shadows, malleably blended with subtle intonation. Through pressure alone, a pencil can sing off the paper with a bold tenor or speak quietly with subtle wisps that evoke imagination feathered by hazy mirage. It’s replete with mythology and history. 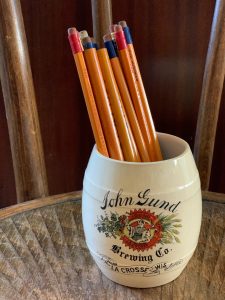 Pencils have historically been yellow, at least in the United States. It’s not an easy color to ignore. In the late 19th Century a Hungarian company, Koh I Noor, started painting pencils yellow to associate their quality with the famous Koh-I-Noor yellow diamond. Shortly thereafter, American manufacturers began applying yellow, the regal color of China, to indicate that the pencil’s lead was made with the superior Chinese graphite. (And for the record, pencil leads never contained lead.) The easy to find color persisted, and still dominates the American pencil market.

This dispenser of dreams, facts, and fiction has a life of its own through smudging and blur. The tool’s hallowed mark is softly extinguished with an eraser, a colleague that proved popular in pink – originally pink due to the Italian pumice which lifted the graphite off the paper. The eraser color ranged from pink to white to gray depending on the pumice that was used. Erasers are now made with synthetic rubber instead of pumice. 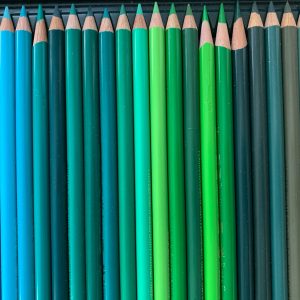 The eraser, held closely in a metal ferule that is kin to the paintbrush, sits in judgement at the diametric end of the point, lying in wait for error, over-stepped boundaries, reconsideration, and creative opportunity.

Hold the graphite and add a dash of color mixed with clay and the pencil reflects nearly any point of the rainbow, tone of the earth, or animal imagined. Every color has its own story to tell. A mixture of colors weaves together a spectrum from duet to full-throated symphony.

The pencil is patient, ever ready to pour its heart out in song, poem, play, narrative, novel, or leap with joy from sketch to mathematically thoughtful deliberation.

Does the inanimate pencil, now soundly anthropomorphized and brought to life, take pride in its accomplishment? Imagine the brief flicker of the pencil’s knowing smile. By proof, theorem, hypothesis, equation, or thesis the pencil abides in contemplation, hanging back with a casual thumping doodle and roaring to life to break out and seize the moment with certainty. 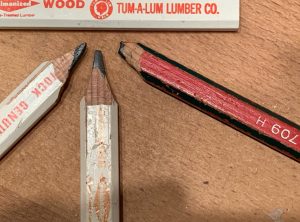 Our homes, decks, and fences are built with this menial tool. A quick and ready mark for the saw, and the lowly author of architectural dimensions, supporting beams, foundation, design, and construction. Carpenter’s pencils are flat by half-an-inch on one side and one-quarter of an inch on the other side, making them less likely to slide, easy to grip, and an always available measuring device. Embedded with a harder graphite that’s much less likely to break, they’re renowned for marking and scribing on a wide range of materials and can be sharpened differently on both ends. They deliver a thin or thick line by simply rotating the pencil.

And in the midway between dusk and dawn when you’re worn and tired this thin companion is quickly resuscitated, jumping to life like a bolt of espresso, restoratively sharpened at 3 a.m. and focused with a few cranks of shavings: the whiskered wanderer, presentable, shouldering the task once again. 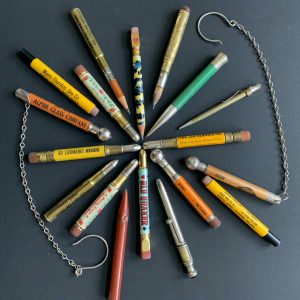 Pencils are highly affordable. With a shelf life that knows no bounds, after many years of having been lost in a drawer, in a mix of this and that, pinned back beneath a couch cushion, stuck behind a wall, or ignored due to favoritism, the pencil reliably waits with bated breath to speak again, emerging from its chrysalis of dust and forgotten memories. Drawing on lineage, you can continue the line that was left by an antecedent many years before.

Never dry or parched, the pencil holds its own, remarkably suited for almost any surface; lightfast through the tears and rain, buttoned up for a blustery day or a sad, sad thought quietly shared with a diary, a friend, or a long-lost helpmate, navigating the years and awaiting the message in a bottle.

While the lowly pencil lacks a lustrous shell, it wears its personality on its sleeve, weathers teeth, nicks, and scrapes with knives, growing shorter in height with each active use, intentioned or accidental break – economically reinvigorated through the generous prosthetic of a pencil extender – a treasured old friend. Flat, hexagonal, and round; the pencil is dressed for any occasion, ready to roll or stubbornly resist. The pencil remains an inexpensive, egalitarian, and unpretentious luxury; yours to have and to hold. Echoes of a tree scented plank of the California cedar forest: wood that watched over a tribe of animals, and once rose into the sky. 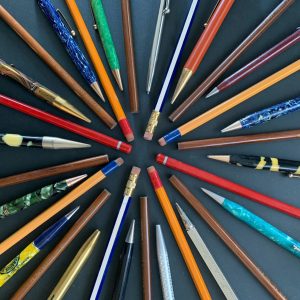 Pencils are practical visionaries that have democratized communications. Henry David Thoreau, the American transcendentalist, author of Civil Disobedience (inspired guidepost to Gandhi, Martin Luther King, and John Lewis), was also a proficient inventor. American pencils were inferior to British pencils because American graphite – the key ingredient in pencils – was oily and easily smudged. Graphite is one of three natural forms of pure carbon – the other two being coal and diamond. By combining a clay binder with U.S. graphite, he created a superior pencil lead and transformed the family business into the leading U.S. pencil manufacturer.

The unbridled realization is that the possibilities of a pencil paired with paper are infinite. Endless potential stored and waiting to blossom. There’s an immeasurable combination of words, languages, letterforms, lines, shapes, shadows, thickness, depth, and tone in the flat earth of two dimensions and the hallowed world of three. It holds the story of your life.

Buy a pencil for what you know and what you might imagine.